The Division of Evolutionary Ecology is focused on the genetic and molecular mechanisms that underlie ecological and evolutionary processes. Our main model system is a small fish called the threespine stickleback (Gasterosteus aculeatus). These fish have adapted to a variety of marine and freshwater habitats across the Northern hemisphere and consequently evolved incredible diversity in their behaviors, morphologies and life histories in a relatively short evolutionary time scale. The development of genetic and genomic tools for these fish has allowed us to identify specific genetic and molecular changes that underlie phenotypic diversity.

Current research in the Division of Evolutionary Ecology is focused on the genetic and genomic basis of adaptation and speciation, the genetic and neural basis of behavioral evolution, and the evolution of sex chromosomes. 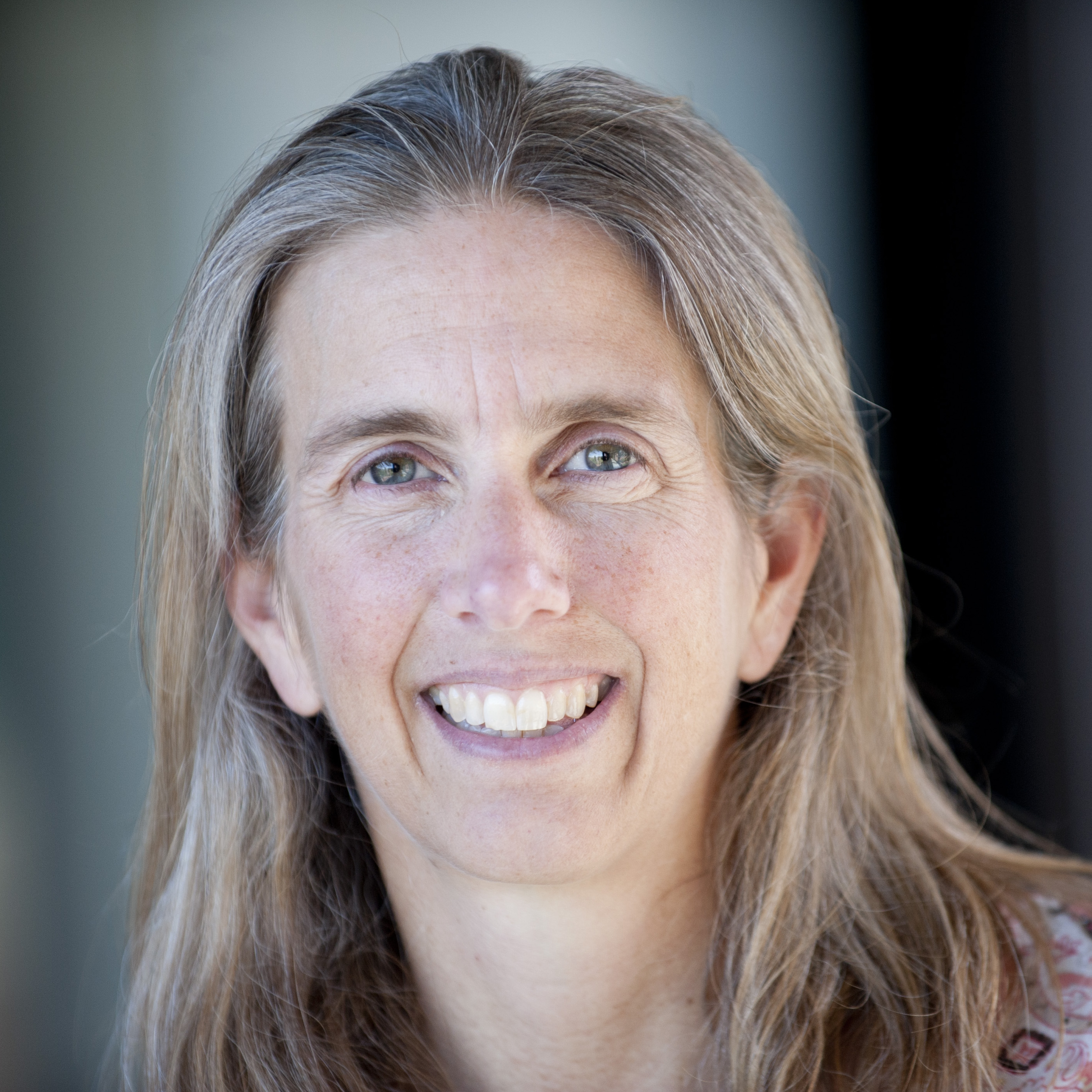 Katie Peichel elected to the American Academy of Arts and Sciences

Today the American Academy of Arts and Sciences announced the election of 276 artists, scholars, scientists, and leaders in the public, non-profit, and private sectors, including Professor Catherine (Katie) Peichel!

Academy members are world leaders in the arts and sciences, business, philanthropy, and public affairs. They are based across the United States and around the world. Current Academy members represent today’s innovative thinkers in every field and profession, including more than two hundred and fifty Nobel and Pulitzer Prize winners. Katie is beyond honored and humbled to be included in the long list of distinguished members, including international honorary members Albert Einstein and Charles Darwin!

Founded in 1780, the American Academy of Arts and Sciences honors excellence and convenes leaders from every field of human endeavor to examine new ideas, address issues of importance to the nation and the world, and work together “to cultivate every art and science which may tend to advance the interest, honor, dignity, and happiness of a free, independent, and virtuous people.” 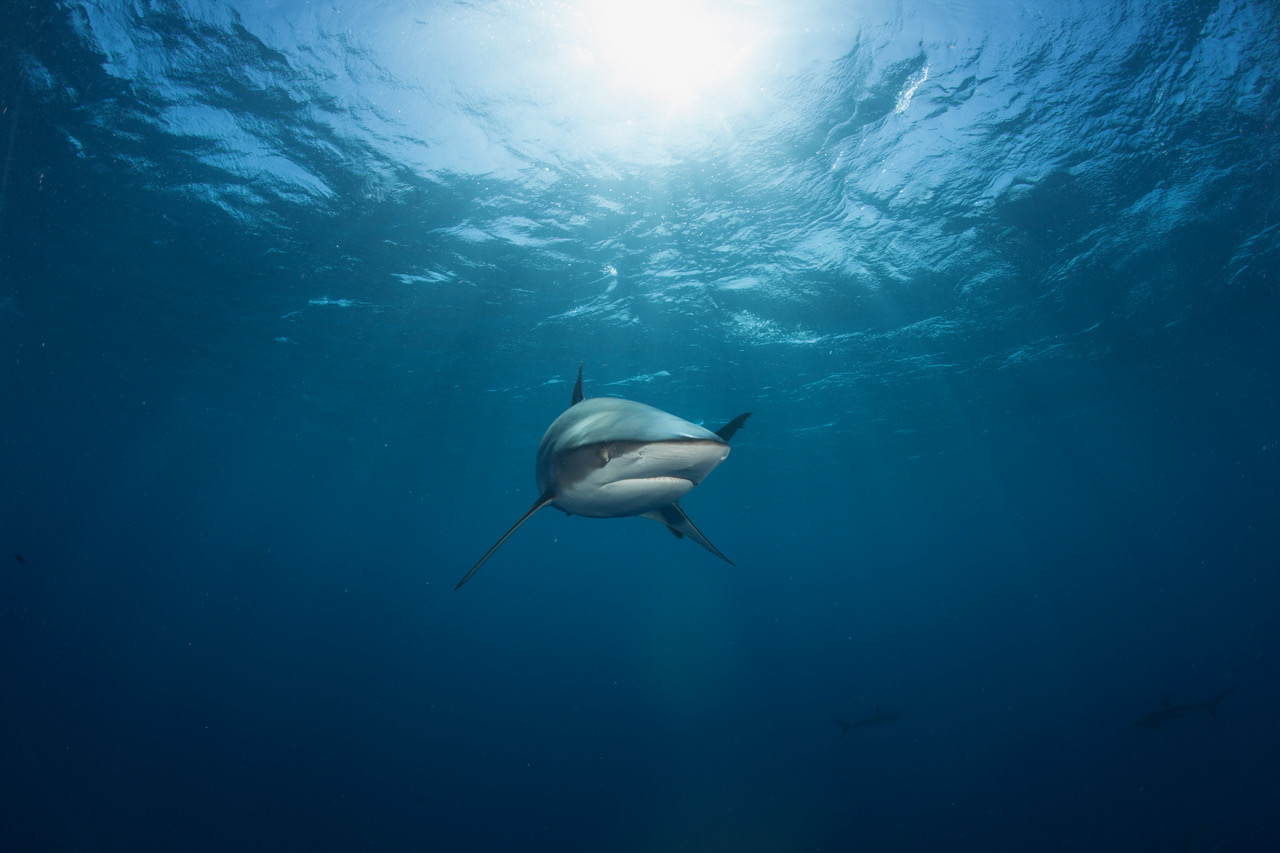 About the distribution of biodiversity on our planet

Dr. Marius Roesti of the Division of Evolutionary Ecology led a study published in Nature Communications that challenges a long-standing explanation for the distribution of biodiversity on our planet. Since Charles Darwin, biologists have been using the so-called "biotic interactions" hypothesis to explain, at least in part, why the tropics around the equator are so species rich. The hypothesis focuses on the importance of interactions between species for biodiversity and is intuitively appealing: the stronger the interactions between species, the faster evolutionary change, thus resulting in increased species diversity. Testing this long-standing hypothesis has proven extremely difficult in the past, and the results from past studies are mixed. This publication in Nature Communications now further challenges the general validity of the "biotic interactions" hypothesis. The study suggests that a specific but fundamental interaction between species – predation by large fish such as tunas or sharks – is stronger in the temperate zone than near the equator. According to the "biotic interactions" hypothesis, stronger interactions should be accompanied by a higher diversity of fish species – a pattern that is also not born out by the study. Marius began the research work while a postdoctoral fellow at the University of British Columbia in Vancouver and completed it after moving to the University of Bern. 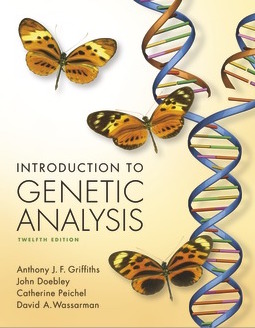 The 12th edition of the Introduction to Genetic Analysis textbook has just been released. Katie Peichel revised and updated the chapters on Genetics and Genomics, Developmental Genetics, Chromosomal Changes, and Evolution. She added content on next-generation sequencing methods and analyses, as well as an evolutionary perspective on genetic analyses in non-traditional model organisms throughout these chapters. Katie was honoured to be an author on the same textbook (5th edition) she used as an undergraduate studying genetics at UC Berkeley many years ago!

Convergent evolution in the genomics era

A special issue of the Philosophical Transactions of the Royal Society B was published today on the identification of the genomic factors underlying convergent evolution, i.e. the evolution of similar phenotypes in independent lineages. Dr. Diana Rennison led a study published in this special issue. In collaboration with Katie Peichel, Dan Bolnick and Yoel Stuart (University of Texas, Austin), she identified both ecological factors and morphological traits associated with genomic regions that are repeatedly differentiated across 16 independently evolved pairs of lake and stream sticklebacks from Vancouver Island, British Columbia, Canada. This study highlights the importance of including ecological and morphological data in population genomic studies to identify links between genotypes, phenotypes and fitness. 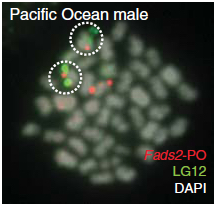 What factors contribute to colonization of new ecological niches? To address this question, Asano Ishikawa and Jun Kitano (National Institute of Genetics, Japan) led a collaboration that included the Divisions of Evolutionary Ecology and Aquatic Ecology & Evolution in the IEE, and our colleagues at Eawag. Together we demonstrated that there have been multiple independent duplications of a gene required for fatty acid biosynthesis in lineages of fish that have successfully colonized freshwater, but not in lineages that have failed to do so. Genetic studies in threespine stickleback demonstrate that this duplication increases survival in freshwater diets that lack essential fatty acids, suggesting that this gene duplication contributed to the ability of fish to invade nutrient poor freshwater habitats. 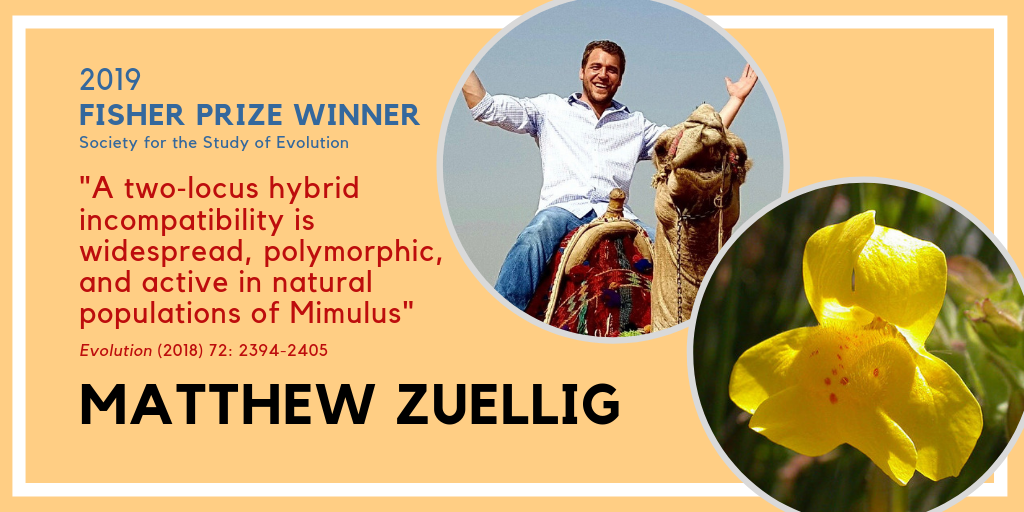 Dr. Matt Zuellig wins the 2019 Fisher Prize from the SSE

Dr. Matt Zuellig, a postdoctoral fellow in the Division of Evolutionary Ecology, has been awarded the 2019 R. A. Fisher Prize, which is awarded annually by the Society for the Study of Evolution for an outstanding Ph.D. dissertation paper published in an issue of the journal Evolution during a given calendar year. Matt’s paper “A two‐locus hybrid incompatibility is widespread, polymorphic, and active in natural populations of Mimulus” was published in Evolution in 2018. During his PhD research at the University of Georgia, Matt identified the genes that underlie a two-locus hybrid incompatibility between two species of monkeyflowers: Mimulus guttatus and M. nasutus. In this paper, he mapped the distribution and frequency of these alleles in natural populations, providing insight to how speciation loci are maintained in the wild despite ongoing gene flow.

New paper by students from the Evolutionary Ecology research practical

Students Michelle Gygax and Ana Rentsch recently published a paper in the Journal of Evolutionary Biology in which they report the results of a project they conducted under the supervision of Dr. Diana Rennison during the 2016 Evolutionary Ecology research practical. They found that threespine sticklebacks raised in ponds with a predator (cutthroat trout) exhibited more lateral barring (stripes) than threespine sticklebacks raised in ponds without the predator. An increase in the presence of vertical barring was correlated with an increase in water clarity and littoral habitat use. These data provide experimental evidence to support the hypothesis that vertical barring has evolved in sticklebacks due to selection by visual predators for cryptic coloration in vegetated habitats. 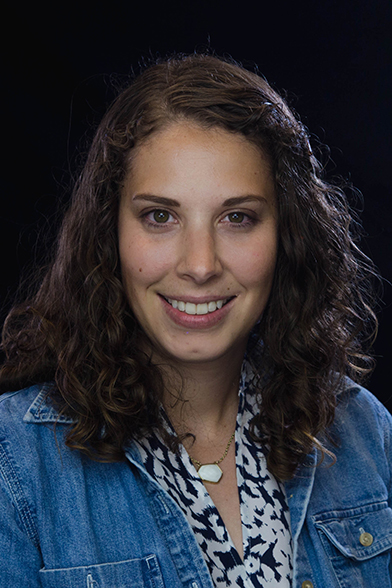 Dr. Diana Rennison, a postdoctoral fellow in the Division of Evolutionary Ecology, has been awarded a Marie Curie Fellowship. In her project, Diana will address an outstanding question in evolution: are the genetic mechanisms that underlie adaptation to different environments predictable? Theoretical work suggests that pleiotropy - when a single gene influences multiple traits - might be a factor that constrains the types of genes that are used during adaptive evolution. Diana will test this long-standing theory using genomic data from sticklebacks that have repeatedly and independently adapted to divergent habitats. Her work will provide insights into the mechanisms that underlie the repeatability and therefore the predictability of evolutionary responses to environmental challenges such as climate change. 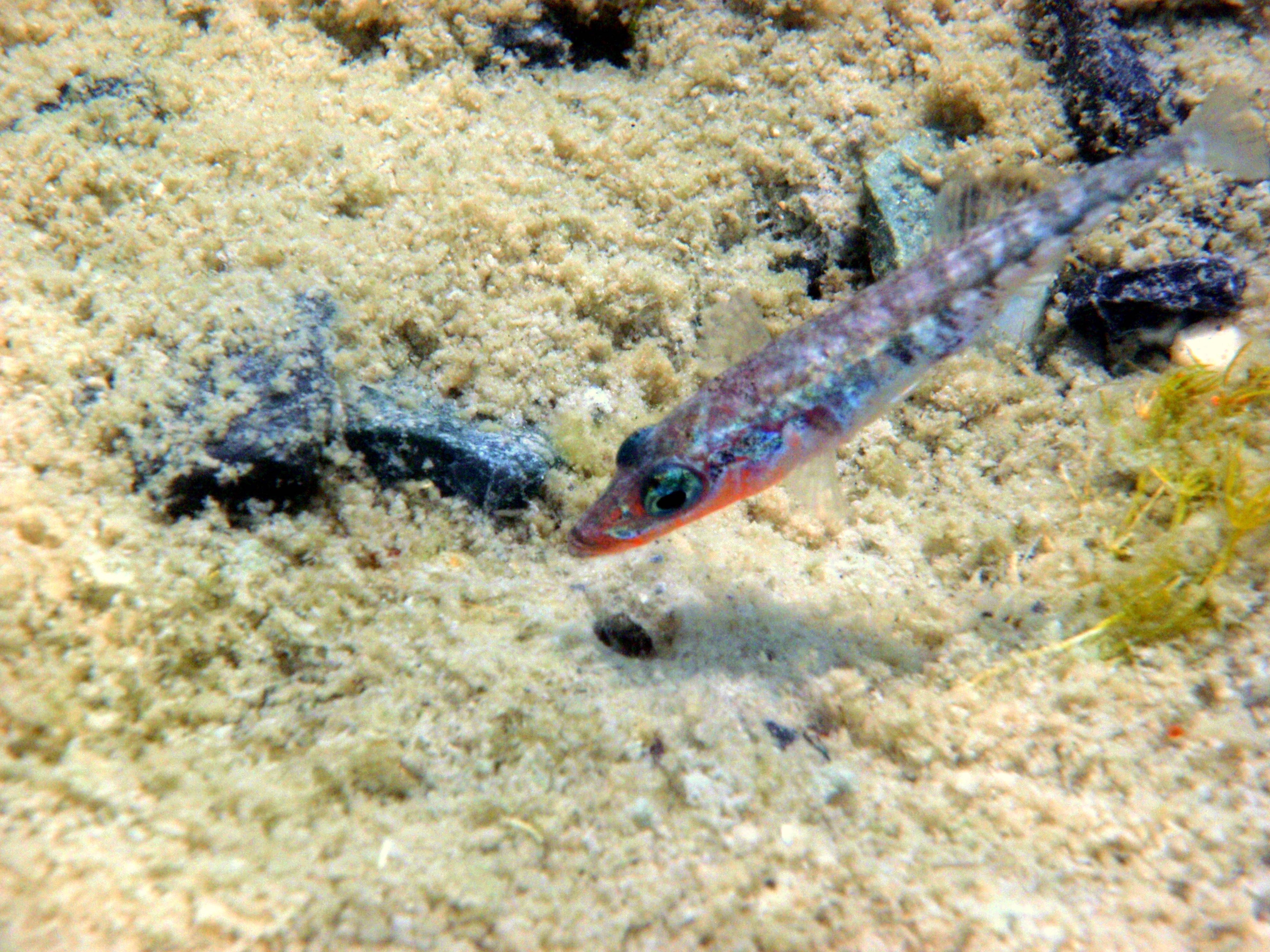 How are associations between traits under divergent selection and traits that contribute to assortative mating maintained in the face of gene flow during ecological speciation? In a new paper in Current Biology, Catherine Peichel, Dolph Schluter (University of British Columbia) and colleagues answer this question using a classic model of ecological speciation, sympatric benthic-limnetic sticklebacks. To allow for recombination between loci underlying assortative mating and those under divergent ecological selection, they assessed the mate choice of benthic-limnetic stickleback F2 hybrid females for wild benthic or limnetic males under natural conditions in ponds. Remarkably, F2 females chose males with a similar body shape and size to their own. Furthermore, genetic loci associated with F2 female mate choice also predicted F2 female morphology. These data provide empirical evidence to support the long-standing theoretical prediction that genetic coupling between assortative mating and traits under divergent selection can facilitate speciation in the face of gene flow. 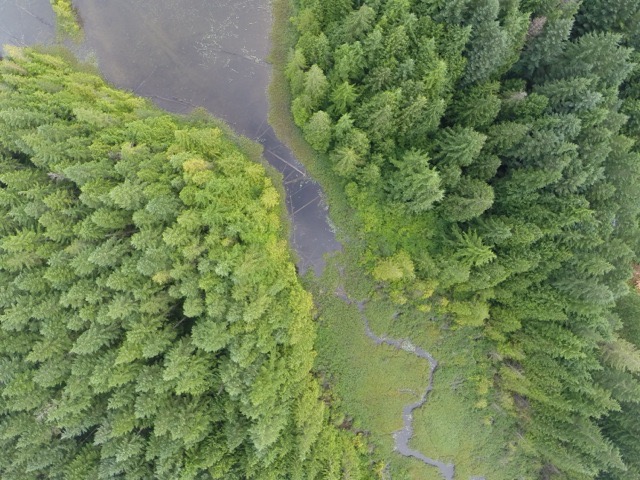 How repeatable is evolution?

Across the Northern hemisphere, sticklebacks have independently adapted to living in different habitats that are found in adjacent lakes and streams. But, do the lake and stream sticklebacks always evolve in the same way? In a new paper in Nature Ecology & Evolution, Katie Peichel and many colleagues including Yoel Stuart and Dan Bolnick (University of Texas) and Andrew Hendry (McGill University), found that the evolution of lake and stream sticklebacks from 16 watersheds on Vancouver Island, Canada is sometimes repeatable, but not always. They found that the repeatability of evolution could be explained both by the extent of ecological similarity across lakes or streams and by the extent of migration between the lakes and streams. This study sheds new light on the factors that might allow us to predict evolution.

Our paper on the genetic basis of schooling behaviour was selected for the 2016 Editors' Choice Award in the journal GENETICS. This work was selected because it provides one of the first examples of a genetic change that underlies the evolution of vertebrate behavior in the wild. 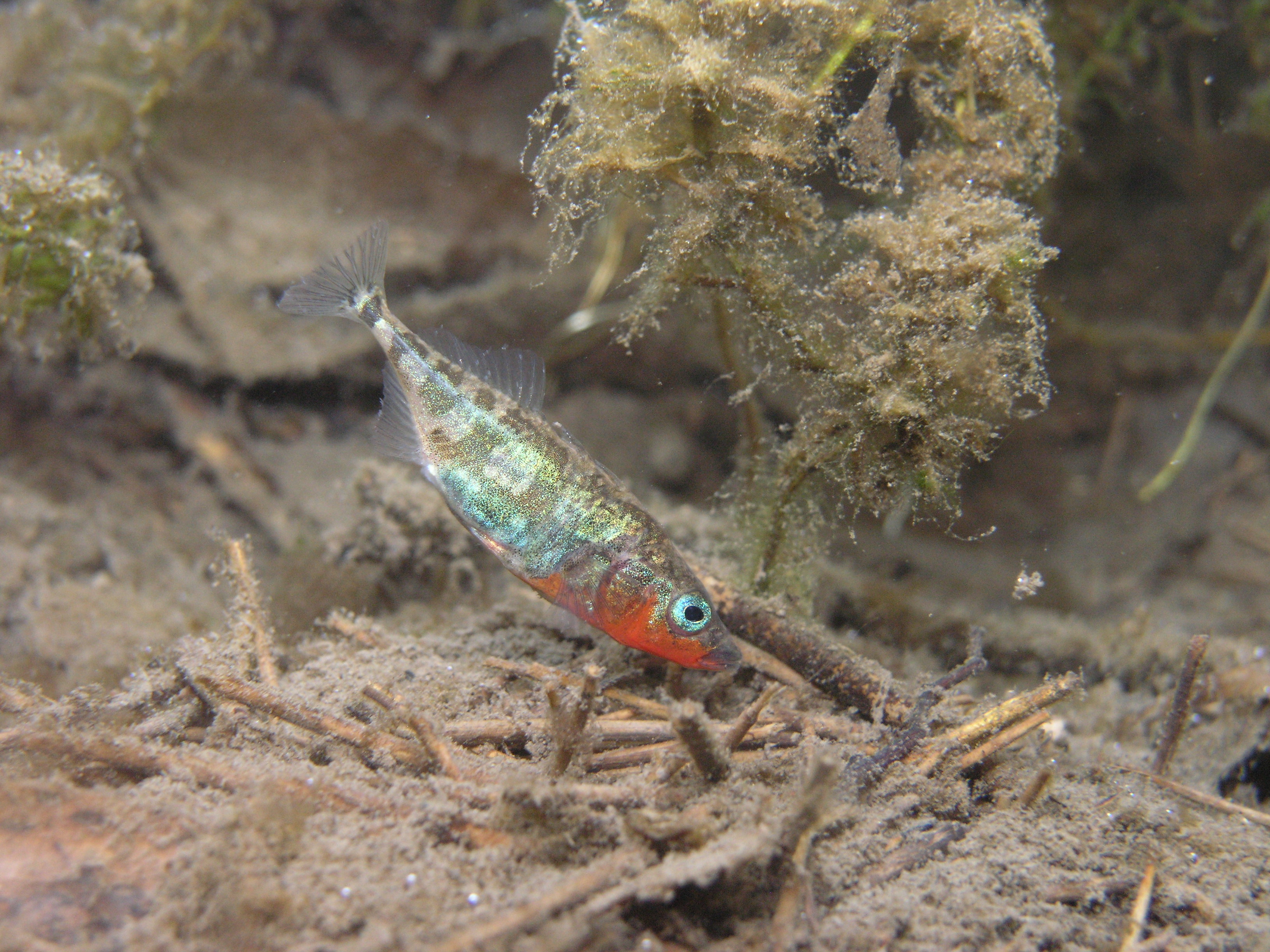 Genetics of adaptation in sticklebacks

David Marques and Katie Peichel collaborated on a comprehensive review of the lessons learned about the genetic and molecular basis of phenotypic diversity using stickleback fish as a model system. These studies in sticklebacks have provided answers to long-standing questions about the effect sizes and genomic distribution of mutations involved in adaptation, the role of regulatory mutations in phenotypic evolution, and the genetic and molecular basis of repeated phenotypic evolution. This review was published in a special issue of Philosophical Transactions of the Royal Society on “Evo-devo in the genomics era, and the origins of morphological diversity”. 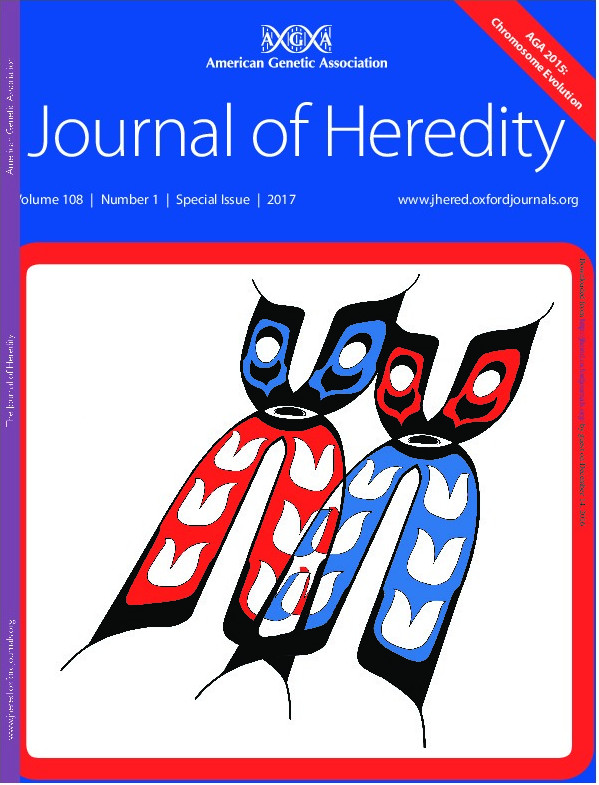 Research on the contribution of changes in chromosome structure and number to evolutionary processes has recently undergone a renaissance. This has been catalyzed by detailed knowledge of the molecular mechanisms that underlie chromosome structure and function, as well as advances in genome sequencing. To bring together molecular and evolutionary biologists working on chromosome evolution, Katie Peichel organized a Presidential Symposium of the American Genetic Association on the topic: “Chromosome Evolution: Molecular Mechanisms and Evolutionary Consequences”. This conference also resulted in a special issue edited by Katie for the Journal of Heredity, which has just been published. 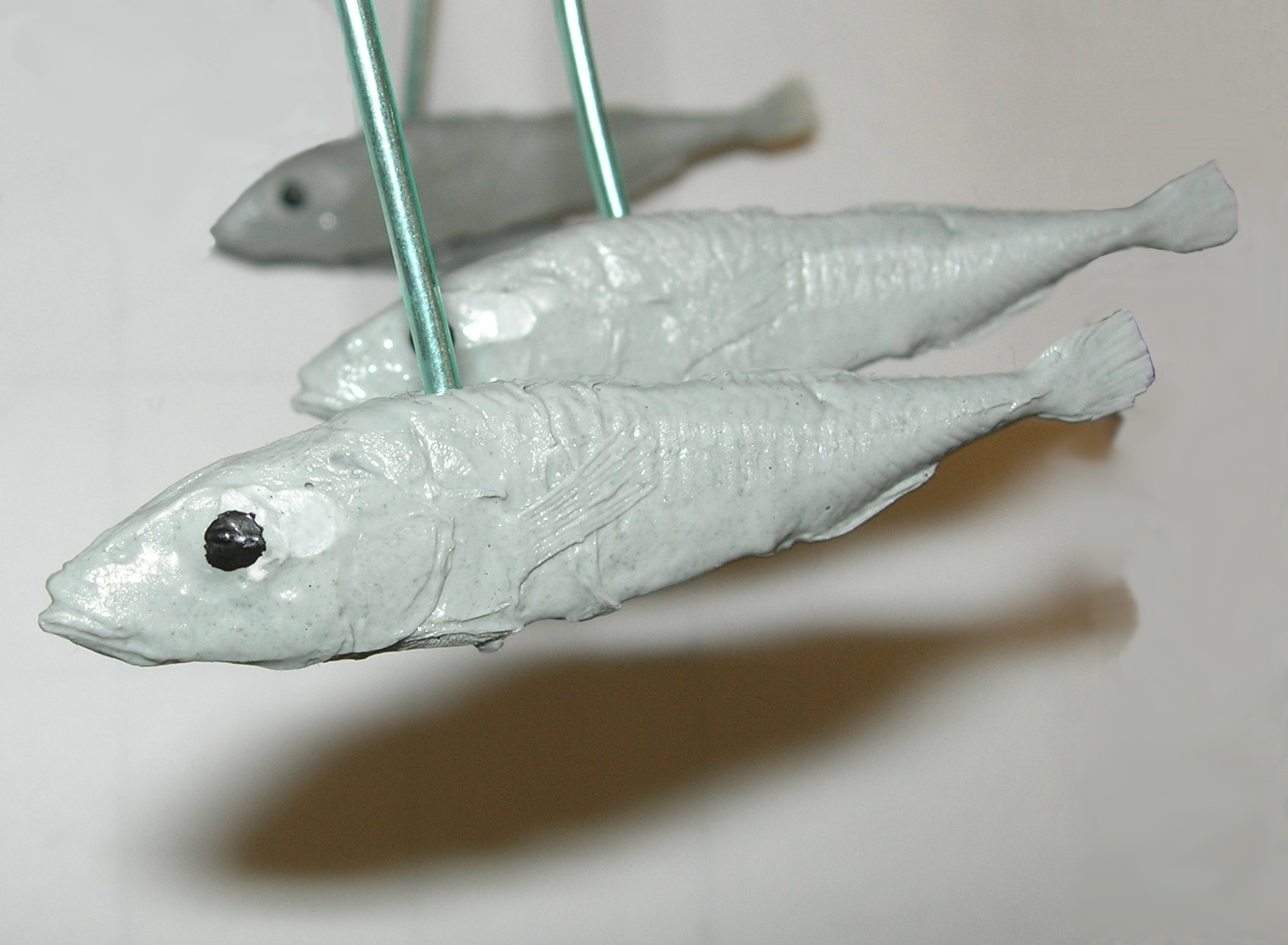 Schooling is a fascinating behavior that has long drawn the attention of behavioral biologists, neurobiologists, computational biologists, evolutionary biologists, and now geneticists. In this study published in GENETICS, Anna Greenwood and colleagues in the Peichel group used a model school assay and transgenic approaches to show that natural variation in schooling behavior between two populations of threespine sticklebacks is caused by the gene Ectodysplasin. This work provides a rare example of a genetic change that underlies the evolution of vertebrate behavior in the wild. 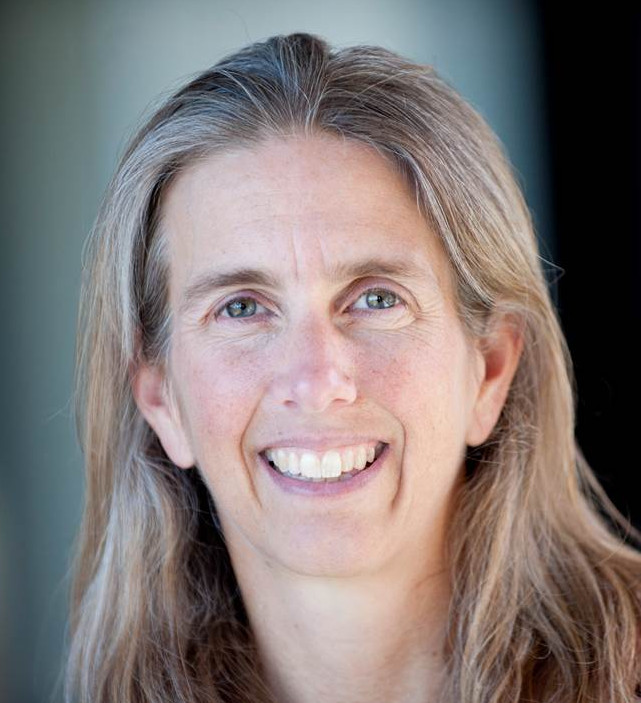 Prof Dr Catherine (Katie) Peichel is excited to join the IEE as a new Professor and Head of the Division Evolutionary Ecology as of August 1. Katie is a geneticist with interests in the genetic and genomic changes that underlie phenotypic evolution, including adaptation, sex chromosome evolution, behavior and speciation. Before joining the IEE, Katie led a research group at the Fred Hutchinson Cancer Research Center in Seattle and was an Affiliate Professor in the Department of Biology at the University of Washington.